Ravi and Ajeet met after so long on 7 April, 2017. They decided to go party at some good place in Delhi to cherish their friendship. After partying, it was time for some soulful discussion about life. This is when they came up with an idea of this initiative REfuel Humanity.

What exactly is this initiative?

There’s nothing more rewarding than giving back and making a difference in the lives of others. This initiative is all about taking those little steps to make this world more beautiful.

Ride for a cause

They planned to distribute food items and water to underprivileged kids at every traffic light they cross on their predefined route. Exactly after 2 days, they started at around 12:30 pm on their bikes from Asharam traffic light.

There they met these girls selling roses at the roadside. Girls seemed extremely happy to see their potential customer. Sometimes, we forget that God has even better plans for us. So was the case with those pretty girls. When they got to know that our team is here to shower love, their happiness was out of the world and only words they could utter were “Bhaiya, aap dubara kab aaoge?” Those words were enough to give us a head start in our initiative.

Who’s say that we don’t know how to pose?  Let them prove wrong 😛

As per the itinerary, next stop was Lajpat Nagar traffic light. But they could find anybody over there and same thing repeated at the Moolchand. As a result, decision was made to ride till India Gate and on the way near Dyal singh college, finally some kids were spotted with their parents.

I have not seen anything more beautiful and content than the smile of this little cutie!

They parked their bikes and started walking towards Rashtrapati Bhavan. Suddenly, out of nowhere, some kids came running towards them. It really felt amazing to see how small things can bring so much of cheerfulness.

Shortly later, they came across 5 kids of same family. After talking to them, it was found that they all go to school daily and their parents sweep across the India gate to earn livelihood. 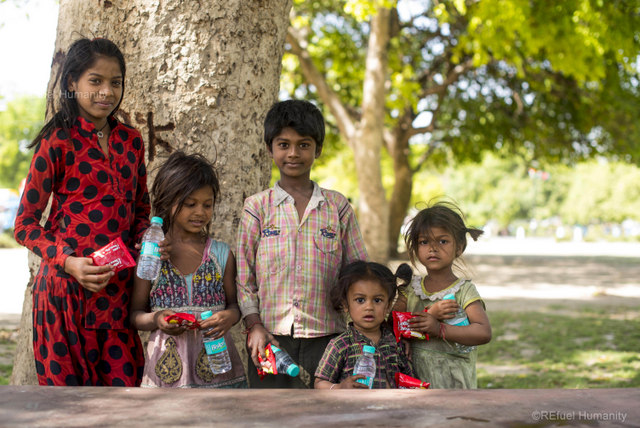 Sometimes, we can learn trivial things in life from these kids. One of which is their innate capability to love unconditionally. Who needs a superhero when you have a big brother like him!

She was among the most silent kids we met out there. But her eyes shout carelessly what the lips fear to say.


And the ride didn’t end that day, in fact it just started off !

Thoughts of our team

Our life probably revolves around our comfortable home, office and malls. But the poor & homeless seem to be living in another world altogether.

I really believe if they work hard and persist, they would one day be successful. But unfortunately they are in a situation so dire that even drinking water and food is a problem. If someone help them solve these basic needs first , then hopefully a handful of them would find the courage to break out and pursue their dreams.

Let’s find out what our team has to say on this?

Ravi Madaan– It was an amazing and meaningful experience that I personally feel that everyone should try at least once. This initiative touched my life in a beautiful way.

Ajeet Singh– It was really an eye-opening experience and I learnt a great deal from the experience. I made it a point to do his quite often now.

If you’re also interested to join, you can start off by joining a couple of rides, and once you have enough experience, you could even do it along with your friends.

You can fill up a form here to be a part of this initiative.

There’s a whole different world out there!

Let’s explore it together 🙂